I spotted him or someone who looked just like him as I browsed through duty free, I wasn’t so sure, but I put a scarf over my head to give me some cover, just in case. My mind kept drifting, and going into some sort of panic overdrive… if it really was him, what in the world was he doing here? What are the chances that we bump into each other in another country; on the day I happen to travel alone? I tried to avoid his line of vision, securing the scarf over my head. I took deep breaths to calm my nerves, trying not to freak out.

I saw him again, as I sat down at the Mac counter, and this time I was sure it was him, because our eyes met and he smiled a “hello”. The last thing I needed to deal with was a confrontation with an ex. We had something going in the past, something so passionate that it was deadly. I was able to walk out of that love/hate sort of relationship, an abusive one that literally took my breath away and choked me on life. But look how cruel fate can be… two years later, in a foreign none English speaking country, with me all alone and my defense on the low, we bump into each other, he still looking as fine as he usual is on his good days. All it took for me to hold myself from falling all over again was the scar on my arm, the one that served as a reminder of the abuse I suffered. The one that told me going back was not an option.
I tried to ignore his smile, the smile that weakened my knees in the past, but I guess it still had that effect, because the sales girl stared at me strangely, a little worried at how pale I had become. It took thirty minutes with the paramedics to get me out of that moment; they figured it all out and kept me with them till I was ready to fly.

The half full plane back to Nigeria had him on board. I could see the back of his head from where I sat, what would happen if he slid into the empty seat next to me? Would the flight attendants be able to handle him? Are sky marshals available on every flight?
I closed my eyes each time I noticed him move, I tried to meditate on the best things in life beyond him… Why wouldn’t he let me be? I was a changed girl now. I was a demon binding, blood-pleading lover of the King now. Wasn’t that enough to scare anyone away? Or was that the appeal? Why was he still desperate for me? The bad boy in him and I could never be anymore… or maybe I was just over reacting. Maybe he wasn’t interested in me, and coincidence was just what it was, he didn’t care about talking to me…

It was such relief that he was nowhere insight when we landed. I was still a little shaken from our brief encounter, but more at ease with no sign of him around. I walked through immigration relaxed and glad to be home, it almost felt like I imagined the whole thing when I looked over my shoulders and didn’t sight him as I waited for the driver to bring the car round. Maybe I over reacted after all.

Got home, my sister still wasn’t back from her journey, thus it was basically just the help and I. I had a quick bath, and lay down to catch up on the sleep I missed on the plane. I was drowsy, tired, worn and slipping in and out of oblivion… that feeling of being asleep but still conscious of your surrounding. Thus, I felt the door open even before I heard it creak. I had to remind myself in my state of half panic, half resignation when I saw who walked in, to remember to always use keys.
Who but the he himself strutted in. He looked dapper. I mean we just flew through time zones and he still looked that good? I forgot to be mad, I just couldn’t be mad at him. I couldn’t be mad at whoever opened the front door and let him up the stairs to my room. I couldn’t even ask myself why they imagined we still had a relationship to let him in as usual.
He already made it in; I might as well deal with it.

He stood by the door, not saying anything. Just smiling, that one sided grin, that smile that sent me in a frenzy at the airport. The smile, that enticed, and made common sense uncommon. Oh, how I wanted to fall into his embrace at that moment, to get lost in what he had to offer, to get lost in all the emptiness. I looked at myself, a mess in the old night shirt. I signaled at him to give me a minute, jumped off the bed and ran into the bathroom as I breathlessly changed into my favorite night slip. I looked in the mirror. If he was going to have me, he might as well have me looking my best.

You see sometimes, it gets tiring when you have to run all the time from someone who never gets tired of chasing. Especially someone who’s come this close to having you to himself, and taking you away from you before… I came out fresh; lay underneath the duvet, knowing what a pretty sight I made. I closed my eyes and opened my arms and waited for his warm embrace, waiting for the bliss of that deadly hug… till a voice in my head snapped me out of my trance, "you’re better than this. Worth more than you’ve ever been, there’s more... better things out there…more love, more joy, more peace, more wealth and success, there’s more life that needs you." (or something close to that anyway)

That shook me, the selfishness of the moment left me, and I fought him off. Oh, I’m sure he thought it was one of those moments when you say ‘no’ when you really mean ‘yes’ so you don’t look cheap and easy. Well he was in for shocker. I fought with all my strength, I clawed at his face, I wrinkled the suit that looked untouched, I kicked and I screamed. Oh how I screamed, so hard, so loud… that i sent him running. And then I called my friend and cried.

See when death comes sometimes, he comes in an attractive form. That you don’t care about tomorrow anymore, you just want to run into his embrace and rest. Sometimes it's scary, sometimes it's not.
That’s what happened one night three years ago. I had a nice holiday all by myself, and just as I got to the airport and cruised through duty free… I had an attack and had to be treated by the paramedics. I was scared but somewhat comforted by the scar on my arm that reminds me of the first time i encountered and defeated death in this form… I struggled to stay breathing on the half empty flight home, and then I felt much better when we landed. l lay down to sleep at home, opting to rest instead of making a brief appearance at a friends pool party in VGC like I promised to.

It was me and the maid at home. Just after midnight, about two hours after i lay on the bed, I had another attack and that’s when I gave up. I was tired of fighting. I wasn’t even going to call the driver to take me to the hospital. Because i was tired. Tired of emergency rooms and the ritual of searching for veins and the prick of the needle that sort of revived me and got me to breath steady again.
I felt it come again, and I felt myself go, and oh, what bliss it was. Then I realized I was in an old shirt and got up to change. How funny that one of the last thoughts you think about at death is your look, does that make you vain? I didn’t want to be found looking unkempt; I wanted to look good at the end. It's crazy but i pictured me found in my pink nightie, under the pink duvet, in the pink room. I wasn't worried when i changed, i even had a smile on my face when i climbed back into bed, waiting for the inevitable, wondering if I should call mum to say something or call someone… then I remembered, oh my God, mum, what will she do? I can't go just yet, I haven’t fulfilled my purpose, I cant …I wouldn’t, I refuse to. And so I jumped out of bed, still feeling faintly and gasping for every breath I could take in, I called my pastor friend and there we were, praying, and speaking life into me at 2a.m, praying away the attack, and I felt better and slept like a baby. I chose life that night…

Sometimes in the face of death, you have the choice to choose life. It was easy to give up, much more easier to let go than fight… There’s always a choice in every fight, just be sure it’s worth fighting for, then fight it tooth and nail to get your victory.
I'm glad i made that decision. I'm thankful I'm alive today. I'm thankful i got over my ex. I'm thankful i had someone i could wake up to support me spiritually right in the middle of the battle.
Was i not scared of death? Of course, i was. But i was sure of heaven and somewhat resigned to all the uncertainties and struggles around me at that moment, that the fear was numbed. I don't live with that resigned look/perception of 'whatever' anymore.... but with a daring look of 'bring your game on, I'm ready'. Death wouldn't take me because i am too weak to fight it, it'll only take me because God says it's that time, and I've got to go.
I choose Life. 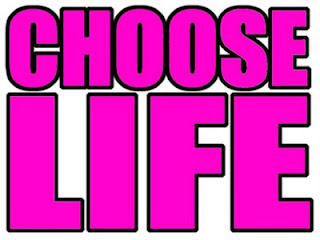 ***For those contemplating suicide? I don't know what it feels like, but what i know is that there's more to life beyond whatever pain or illness or despair you're going through(I should know). There's more out there... nothing is worth giving yourself to death without a fight. Live and fight... Choose life, and in choosing life, you've chosen your victory.
Email Post