On Wildlings, Crows and WhiteWalkers...

The wildlings and the crows as different in ideologies as they were had one common enemy: the night-walkers! ⁣
(Sorry if you’re not a game of thrones fan... you may not ‘get’ this)⁣
⁣
It took Jon Snow eventually embracing wisdom to realize that the wildlings were not the real enemies, and if they kept fighting themselves, they’d kill each other and be too weak to fight the real enemy, exposing the realm to a complete takeover by the army of the dead.
Denominations are not the real enemy!

A lot of Christians are fighting themselves over doctrines, and whose ‘swag’ is better.
Whose church decor is lit.
Whose Choir can ‘sang’. Whose Pastor, Priest, Bishop is more anointed or richer...⁣
⁣
If you spend all your energy fighting each other, who’s protecting ‘the world’ from the night walkers and saving them with the gospel? ⁣
⁣
“If we’re fighting each other then we can’t fight the real enemy.” ⁣
⁣
We need to stop the bickering between the wildlings and the 7 kingdoms and cleave together to defeat the common enemy - the night walkers, by collectively bringing more people into the kingdom, ‘depopulating hell’ as someone said. Fighting the night-walkers, rather than giving them a chance to add to their army of the dead. ⁣
⁣
“Put to rest any division that attempts to tear you apart. Be restored as one United body living in perfect harmony.” (1 Corinthians 1:10)⁣
⁣
Stop fighting Churches or people who have different beliefs/doctrines and face the real enemy first. ⁣
⁣
“We are a global army of believers- we are all fighting for the same thing. We have work to do. Where is the church that is ready to get loose for Jesus Christ” - John Gray⁣
⁣
“I believe that our fellowship with one another cannot be based merely on agreement. It must be based on Jesus, and on the Love that he so readily gives to each and every person who calls on his name”⁣ - Brian Houston
⁣
Sometimes I think that we get so involved with doctrine that we lose sight of the Lord Jesus Christ entirely.” – Kathryn Kuhlman 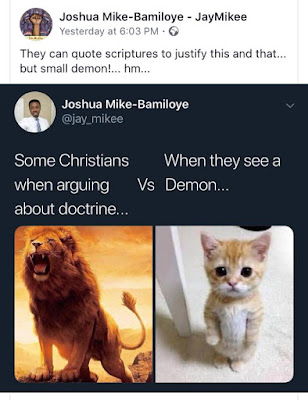