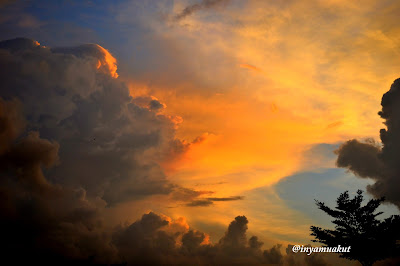 I had made up my mind as I got to oxford street that afternoon, that I was going to spend as much time as I could looking through primark and grabbing as many fairly priced wardrobe essentials as I could. And I indeed took my time, weaving through the throngs of European tourist and carefully double-checking that the right size was on the right hanger of the things I put in my basket. My feet hurt, I had spent hours out shopping before braving the primark madness.

I was finally done and took my things to the till... It was while concluding my transaction that I heard the announcement to evacuate the store and I saw security ushering everyone out. The lifts were barricaded and we all (hundreds of us) trooped down, me clutching my purchases (thankfully I had paid), and others frantically leaving their overflowing baskets… efforts of hours of careful selections through different floors. The staff were confused, I overhead a couple of them asking if it was another fire drill with nothing less than mild irritation in their voices.

My heart beat at the state of oblivion to the obvious danger that prompted our evacuation. When I got out I was shocked to see that the road right in front of us had been sealed off with the yellow tapes by the cops and they were everywhere…. Say what?!
What I was able to glean from the cop who was ready to answer our questions was that there was a suspicious parcel found… But did we run off after getting that information? No! We stayed behind the line looking at what was happening and some even had their phones out recording… I really couldn’t understand why we would do that, why we were hanging around to see. What if the suspicious parcel went off when they were checking it? As my sense started getting clarity, I prepared to walk away when I saw the police take away their barricade and give a clear, it was a false alarm, the shops were allowed to open a few minutes later and you should see how people rushed in… to get their baskets before it was taken away to restock… Was I shaken? Yes. Did I walk away to the tube station, by-passing my stop at Selfridges? No way. I walked back into the store with those running, in, I had to get my VAT done and I wasn’t going to let that false alarm stop me, and then I strolled down to Selfridges to get my perfume, then grabbed something to eat before heading home, abruptly forgetting the some what scary interruption.

I had another experience of this sort one boxing day… the craziness of Oxford Street was on, as usual with the Boxing Day sale. I noticed the cops sealed off the road in front of JD Sports, and blocked everyone from following that way, there was an ambulance and police cars, we were told a young man had been stabbed just a few minutes earlier… it was scary, but after my friend and I stood still for a while, we found another route and kept heading our way to regent street… we had shopping to do, we came out to shop and we were not going to be distracted.
Those were serious cases that came up… but even though it distracted me for a few moments, I went right back to doing what I came out to do, not letting fear stop me, or allowing how shaken I may have been to distract me from my goal of being in the area, which was to shop.

I was thinking back on those two events recently and I realized that as crazy as it feels sometimes, we should go right on back to fulfilling purpose, achieving our dreams after interruptions, most of the interruptions that come our way, though they look threatening, most times are just false alarms… shadows (the devil loves to play with shadows a lot, because he has no real power and they make him and his distractions look bigger than they are)

So even if you get distracted by that, don’t be discouraged with the fear it instilled, too discouraged to get back on your path, like those people didn’t let the bomb scare stop them from their shopping, they literally ran in with speed to continue after the distraction, so they wouldn’t lose what they labored for.

I get to host this wonderful event called Incense… do I get to experience hitches and false alarms? Yes! Financially sometimes, its borderline frantic trying to get everything in order… and sometimes, I see a nice crowd, packed full halls, overflowing halls, other times just under two hundred people when you expect more… but is that enough to discourage me? No! I go right back to organizing more meetings. Even if I get distracted by the numbers. Even if sometimes the budget feels like a huge punch in my guts… I get right back up and do what I ought to do, because there’s a big picture I see, bigger than the distractions and the discouragements that come… there’s a picture bigger than my mind can wrap its hands around, that’s why enlargement of heart is key for me… that’s why getting right up and enjoying every single step as a step of victory is key. Knowing what you’re doing, knowing the end you’re looking to, knowing the picture you see in your heart is the thrust that gets you up and going when there’s any distraction sent your way.

After the roar of the pussycat lion impostor startles you a little, go right back and finish up. (The devil roams LIKE a roaring lion, looking for whom to devour, startle, deceive). Pardon the interruption instead of dwelling on the 'what ifs' it could have been/getting hung on it and just move on!

I've had countless interruptions in life. some enough to floor me and get me fazed, but that's not a loss for me, because as much as I loose my breath sometimes, I never remain there, I always choose to move towards the goal, the bigger picture. Interruptions could come in form of a broken relationship/marriage, bankruptcy, rejection of proposals, 'failed' businesses etc... but you've just got to keep moving.

The picture you see of the beauty it would be if failure were not an option… that’s the joy set before you! So you keep doing what God has asked you to do, chasing those dreams and big ideas, knowing failure is not an option, even when challenges are all around you…. The little distractions will come, but they don’t faze you… your face is set as a flint.
We have people giving up too easily, bowing out to discouragement. Faith doesn’t mean it’ll be easy, but it means it is possible.
Don’t let the distractions deceive, discourage, or hold you bound in fear, but Keep your eyes on Jesus, who both began and finished this race we're in. Study how he did it. Because he never lost sight of where he was headed - that exhilarating finish in and with God - he could put up with anything along the way: cross, shame, whatever. And now he's there, in the place of honor, right alongside God. Hebrews 12:2(The Msg)

He never lost sight of where He was headed… and so He put up with all that was thrown at Him even when they weren’t convenient or pleasant; shame, the cross, the spite… He could see it, and He’s right there, right now, in the place of honor, because He didn’t let the decoy, the distraction derail Him... and we have Him to look up too.

Don’t give up just yet. Keep moving.
Email Post