(I wrote the title down, and next thing I'm singing the frozen soundtrack 'Let it go'. tsk tsk tsk)

I love the picture below… 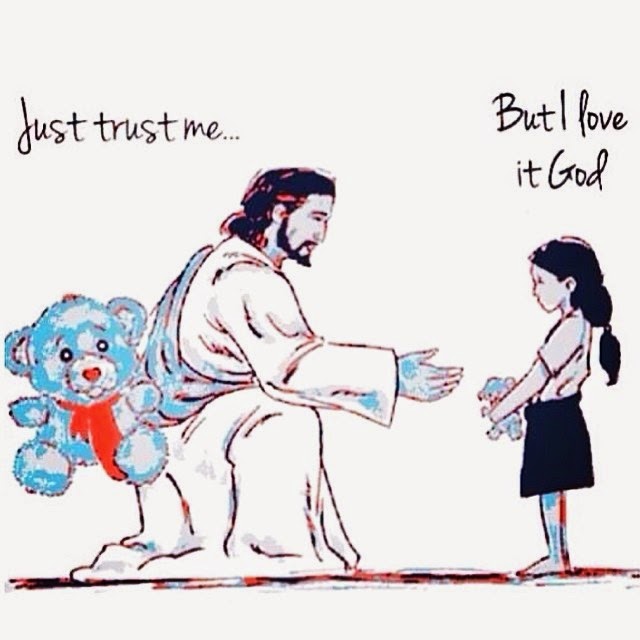 It reminds me of how God would never ask us to let go of something if He didn’t have a better plan. Sometimes, we wouldn’t see that plan in the immediate, sometimes, we would start to question and feel let down as we wait, but ultimately, He’s got a plan that’s much bigger than the pinch we wouldn’t let go of. A seed has to be let go of, sometimes it may feel it has been buried, but it is planted, for it to grow into a fruitful tree/plant.

Imagine if Jesus were alive today. Now that would be something. Crusades everyday in different countries with millions of attendees, (don’t tell me he wouldn’t need a private jet, I bet he would because of his packed schedule.) His twitter followers would hit the roof and his critics would have a field day on the social medias. They’re be instagram posts mocking some of His statements, i.e ”I am the bread of life”, we’d see memes mocking those words like yeah right, maybe your yeast got to your pride, its swollen and you’re spilling trash.

Oh, it would be such a sensation.
To have a living hope, a message, that moves the world, all the miracles and wisdom and boldness. Like what???? He would have feasts with the mafia bosses and the starlets of Hollywood and be ridiculed for it. I bet Kim Kardashian would be a guest at one of the homes He’d be invited to, and posting a controversial selfie on instagram. I sure would be putting up posts about Him on this blog, but the question is, would it be in support of or against Him? Thank God I would never know.

And then when He’s arrested? A social media campaign like no other would reign. His followers would use hashtags that would #breaktheinternet. Retweets that would crash twitter and Facebook posts and videos and songs with soaring number of views and shares
The pressure would be too much for the authority that they would have no choice but to release Him… the social media freedom fighters would celebrate the victory of setting an innocent man free. Even Buddhist, atheist and Muslims would probably fight for this great cause, he’s an innocent man, don’t trample on his rights, let him be in all his foolishness.

You see we wouldn’t see the bigger picture that His living is just a pinch in comparison to the greatness in His death and so we would hold Him tight even when God asks us to let Him go. Because He’s our hero and we cant let such a good man, one who gives us hope go so easily.

We wouldn’t see the bigger picture that His living is good, but His dying is better. Jesus as man was so limited even with all the possibilities of his abilities. Him living is Him in the world, but its us squashed amongst the millions at one of His crusades with no hope of ever getting close enough to touch Him. Him living would be us tuning into a radio program to hear one of His messages, or buying His books, no personal relationship… Him dying is us having him right here with us wherever we are. It’s us having our personal savior with enough time to listen to each and every one of us for the littlest thing.

Him dying is me being able to talk to Him about a stubborn pimple and not worry about wasting the one second I managed to squeeze my way through to him. Him leaving the world from the cross is me having the fullness of Him, having His wisdom whispering to my heart things I would never know or understand on my own, its me not having to save money and wonder what country He would be next and flying there if I can afford it or get a visa, and getting there to sit way back because millions of people queued up and got in the hall before me. And even if I was in His presence, I’d leave not fully satisfied because I would want a more personal relationship with Him.
By letting Jesus go, we got Him living in us. We got the Holy Spirit when Jesus left. How awesome is that? He's with us all day, everyday... just being our best friend, our confidant, our counsel, our comfort and our God!

What are you holding on to? What has God gently asked you to let go of? A relationship? A job? What have you lost that makes you feel beat down and crushed? If He's speaking to you to let go, if He let you lose that thing, then it means, there's something bigger cooking up. It's just a pinch compared to the tablespoon He has in store for you. Cheer up, and keep your hope alive, be expectant!