On Google, Measles and Mind Power...

My cousin’s nanny had measles.

After a day or two of being weary about my 'infection'. I spent the night reading about measles. All the symptoms Google fed me with, I ate up. And it all made sense. I had been feeling unwell for a couple of days, had white rash like stuff in my mouth, rashes seemed to instantly appear on my face as I read, and I suddenly had a cough.  I stood in front of the bathroom mirror looking at all the visible symptoms. Comparing the white rash like stuff in my mouth with the picture online.
I was doomed with measles. I had a restless night, rescheduling my trip in my head. I went straight to mums room when It was morning.

“I think I have measles” I told mum
She gave me that look, you know, like 'you crazy', Something like this .....

“How can? You don’t even have a fever….” She said
Now that’s where she was wrong, I was happy I had some leverage against her nonchalant dismissal.
“I’ve been feeling sick for some days” I said smugly. Wanting sympathy, and an affirmation or some sort of support and advice on how to go about treating myself.
“Make sure you treat yourself for malaria before you travel” That’s what she said, with no emotion. Just like that, she dismissed the seriousness of the matter. Just like that, she brushed off the ‘illness’. How could she? How unfair... I am her baby! 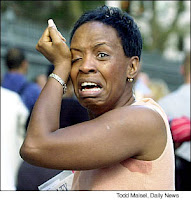 I resolved to prove I had measles.
I went to a family friend who’s a nurse and told her I had measles… I was so convinced and all I wanted was for her to prove I was right. I desperately needed to know, so I could put off buying my ticket, I didn’t want to travel and spread the measles to my nieces.
But just like mum, she laughed and said “you don’t have measles”
I tried to tell her the symptoms and I emphasized on the fever… she ended up giving me malaria drugs.
I told my sister my worries and she nicely said it was probably psychological, sometimes your mind convinces you and you actually start seeing the symptoms, like how she thought she had chicken pox once. That kind of put my mind at rest. I went ahead to book my flight. I didn’t have measles, and the more I tried to convince myself that I was fine, the more I felt fine, and yeah, the fever left after I finished the malaria drugs.

The power of what we read is stronger than we can ever imagine. Our mind takes in and transforms our thought process which in turn transforms the way we view ourselves and thus we call forth things that weren’t as though they were, and somehow they become. This is faith working subconsciously. Unfortunately, we use all that energy on negativity instead of the positive. That’s why it says faith comes by hearing the word of God.(Romans 10:17) 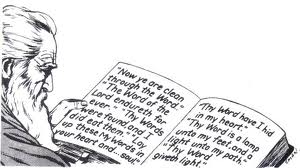 If we pour through the word the way I searched Google that night, with such intensity and belief, and believed it as much as I believed that every symptom spoke to me and even begun to see them physically, then imagine how great our lives will be. When you read the word that says you are blessed, you are the love of Gods life, His friend, His righteousness, Royalty etc and you begin to walk like all the things it says you are.

Most times, we allow peoples skepticism wipe the truth off our mind's eyes. Just like mum wiped that measles away(for good). Standing up to say you’re the righteousness of God to your unbeliever friend who just goes, “ abeg jor, you like this? You wey like woman die?. Abeg siddon make we shack one bottle” and just like that, the sermon from church is just a sermon, not refereeing to you. It doesn't stop with the unbelieving friends, even your saved friends have the power if you allow them, to discourage you from your dreams... all it takes is a word of doubt to shake your resolve. Be-careful who you share your dreams with and be-careful what you watch and read, they have a way of planting themselves deep within your heart and developing into plants of either negativity or positivity.

The bible says you are royalty… start seeing it and following the kingdom etiquette like a real prince/princess.
I love this confession Joel Osteen makes his congregation say before every sermon

"The angel of the LORD appeared to him and said, "Mighty hero, the LORD is with you!" Judges 6:12 Gideon saw himself as weak and suddenly God was calling him a warrior... it was hard to believe, but soon enough, he started to see himself as God addressed him and he went on to be a hero defeating the enemies of Israel. Is there a promise in God's word that you're claiming? This year, begin to see yourself as that which the word says... be drenched in it, till faith brings it to existence.

Like Donald Trump says "As long as you’re going to be thinking anyway, thing big" and I say "as long as you're going to be thinking, think positively" The mind is a powerful tool, don't misuse it. See yourself soaring and you will soar, devour books that speak life and wisdom to you and not movies or books that take away the little sense you've got and sends you jumping down buildings because you think you really are 'superman'. Stop feeding your mind with symptoms of measles that will begin to physically manifest because you're engrossed in it. And stop sharing the manifestation of your faith with people who'll only pour ice cold water to quench the fire of God's truth in you.