I grew up watching; reading and fantasying about fairy tales where princesses were woken up from sleep in the loveliest way.  Either by the kiss of a prince or the chirping of birds.
Oh, the birds, just chirping beautiful melodies, causing the princess to get up in beautiful fluid movements, stretching, smiling and then she opens her window and laughs with the birds and even sings with them as they sometimes dress her up!... sigh! Cinderella!

You see, birds wake me up in this season.
All I can say is… the movies lie!
I usually don’t sleep before 12midnight. So, sometimes my bedtime could be anything from 1am to 4am. And just as I cozy up to sleep, those birds start making horrible sounds, this isn’t singing, more like screeching.

I now know for sure that those birds in the movies are actors as well… they’re real good actors, because they sing well there while they just frustrate me here. Maybe they have to have good chirping voices before getting the roles.

If the birds aren’t singing, they are pecking at my window, hard and fast… or doing both, unrelenting, for as long as it satisfies their mean souls, and nothing I do can send them away. Not throwing my shoes in the direction of the window they prefer, not struggling out of bed to hit the window, because even if they stop when I do, as soon as I get myself covered up again, the commotion starts.

Thus on some days, my morning routine includes getting out of bed at about 5.30/6am, sleepily staggering out of the room to another room, far from the birds, a room where I can grab another two hours of sleep before facing the day. I have given up on trying to make them stop. I just cant anymore.

Be careful what you wish for… some things are just what they are, movies! And theyshould be left there. I’m not sure I’ll smile so fondly whenever I get to watch Cinderella again and see those birds sing to her, na… I just may stone the TV.

I had to read about these birds, to find out why they peck at insistently at windows, and I discovered that they are alarmed and get aggressive at their reflection staring back at them from the mirror, thinking its another bird. Thank God I don’t have to go through fighting the mirror everyday thinking my reflection is my competition. 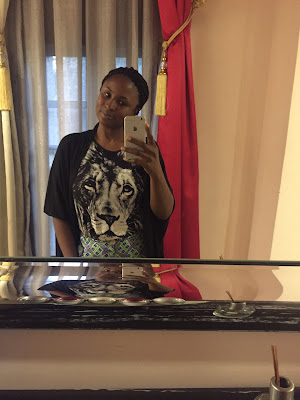 But as much as I don’t fight the mirror, I’ve come to realize that sometimes we tend to fight people, aggressively peck at them silently or otherwise who mirror a reflection of ourselves.
Like you cant stand someone who has a certain character, only to do a thorough check and realize it’s the you in them that repels you.

I have come across people who grossly hate being spoken about. Its like the greatest taboo against them, even when it’s the truth been spoken, especially bad truth, but they see no harm in running down everyone they can think of, always something wrong to say about someone else.
Its just like the bird situations.
Gossips hate to be gossiped about.
Stingy people hate stingy people,
And my goodness, cheats hate to be cheated on.
Have you met a man who is a serial cheat and how he gets aggressive and offended if he finds his partner as little as smile at another person?
Sometimes we’re just birds pecking at ourselves… sometimes.

Check to see you aren’t pecking at yourself. Your suspicious mind could be because of what is in you.