You Know Nothing Jon Snow... 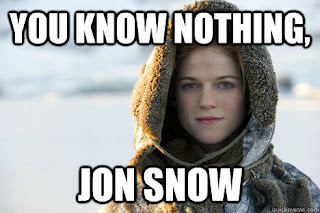 You know nothing Jon snow!
(I read all 5 game of throne books in one week! I shouldn’t be proud about it as I shut every other activity down and was lost in Westeros! )

Ygritte’s words to Jon kept ringing in my head.

“You know nothing Jon Snow.”

But Jon knew a lot.
He knew he was a stark... and that was power!
He was raised right as a noble ‘bastard’ of Winterfell; highborn education, martial training, riding, archery, leadership skills etc.

But when he came beyond the wall, his knowledge as ‘nothing’ as she said it was, made him stand out, kept him alive and grounded.
He really didn’t know much about the truth beyond the wall, but it wasn’t nothing!

Sometimes I feel like I know nothing! Especially when it comes to teaching myself and people who come around me.
But then I know I am Gods beloved child, so loved that He gave His son Jesus to die for my sins, and he was buried and rose again on the third day according to the scriptures! (1 Cor 15:3-4)
I am a child of God.
I know that. It’s my identity... the righteousness He has imputed to me.
I’m no bastard of heaven, I am a true born son.

“For it is through the revelation of th gospel that you are being saved, if you fasten your life firmly to the message I’ve taught you, unless you have believed in vain” 1 Cor 15:2

That is the foundation of my knowledge and even if I don’t know all the Greek and Hebrew words in the bible.
Even if I don’t understand some things. This revelation is what qualifies me to be who I am in Christ and to live a life of victory and epliots. "The devil doesn't know what to do with a Christian who has the revelation that he is the beloved of God..."

The reason we continuously hear about the love of God and our righteousness, is so we can handle evil and things that come against us. We wouldn’t put our hand down in shame because we’re confused about a lot of things... we know the one thing that’s important. Stop looking for deep revelations if they’re not coming to you, it doesn’t mean you know nothing, you know the main thing you should know. Stick with the basics.

So maybe like me, you know nothing.
Get rooted and grounded in what you know. Be established in the basics!
That Christ came, he died and was buried and rose again on the third day according to scriptures.
That you’re a trueborn child of heaven, not a bastard like the devil.
As we establish ourselves in this truth that we know, our hearts are open to know more without struggle.

It didn’t take Jon long to begin to know more, about how to handle the wildlings, the army of the dead and the coming winter. Inbeing all that he was, with the little he knew, he became a leader, and he learned more.

Knowledge springs from being rooted in the basics.