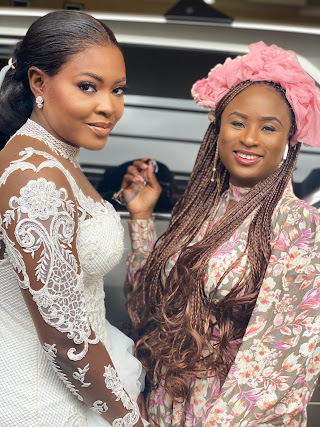 I followed Olive on a ‘walk’ one morning. I had been going on evening walks by myself and doing just fine, but hers sounded more 'fun', so I followed.

I fell back and was far behind her, not from lack of trying to catch up. I was so sure I was going to throw up right before passing out after going uphill on one of those Guzape roads... she was already long gone.

I gave up even trying, picked up my phone and called her not to bother to wait for me, then sat down for a while on a rock by the roadside, before getting up to attempt to backtrack my steps home… it was when I found myself considering what the worse that could happen would be if I lay down on the pavement, that I knew I needed backup. It was such torture, I shamefully called Olive to pick me up when I couldn’t get through to the driver… she was already done with the trail and back home. And so I got into the car with my 'full chest'

to hide my shame when she found me.

My excuse is... I woke up with a weird cramp that morning.

Truth is, I attempted following another’s pace knowing my stamina was different. I do walks by self at my own pace, and I cover the same number of steps, even more sometimes … but on a different route from hers, and I’m not usually feeling like I’m being murdered in the process.

When you see someone jog past(in life or on the streets), you don’t know what they’ve been doing; the prayers, diligence, motivation… don’t just start following blindly.

amongst other reasons best known to her.

Know your pace and follow it. You may follow another blindly and end up in a ditch or fainting by the roadside if you have different goals.

I managed 4km that day before my life felt like it was going to end. I’d done 4km and more prior to that in my own pace and I was fine... I did it in another’s pace, trying to match up her energy and I was done for.

Faith is not boldface! If you hear a person saying certain things boldly.... they must have studied and found a truth in it to amplify their voice of faith. Scriptures just may have come alive in their hearts… to see hope in that situation... or you don’t even know what God has said to them to give them that audacity. You may copy, and say what they’re saying louder than you heard them speak but ,without a revelation you may not get the results you expect, then you call it a scam.

Don’t follow to buy the designer wears, or that luxury car because the next person has it or it's the new IT item... you don’t know what they’re doing to afford it... they just may be making what you earn in a year in an hour without having to sweat. You’ll buy and buy to keep up and end up frustrated and out of breath, sitting on a rock and calling people to lend you money for your basic needs.

Life is beyond keeping up appearances.

Go at your pace(the pace God is leading you) for the best possible outcome for you.

God has a prepared path for everyone... it may be similar, but it's always unique to you. Let others motivate you, but don't put undue pressure on yourself to keep up with what you're not built endure...

“The Lord says, “I will guide you along the best pathway for your life. I will advise you and watch over you.”

Look to Him for direction.

There’s a group of people we’re advised to follow though… but like I said, we follow in the similar paths of examples but at paces and with experiences unique to us.

“So don’t allow your hearts to grow dull or lose your enthusiasm, but follow the example of those who fully received what God has promised because of their strong faith and patient endurance.”