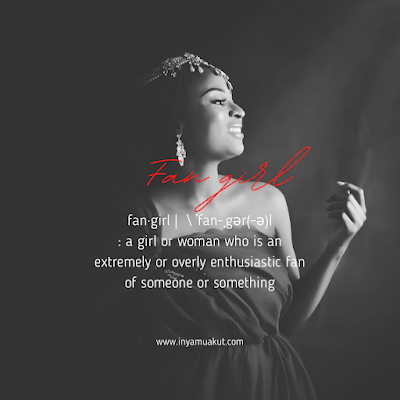 A top arsenal player’s son went to school with my nieces. I’d tag along to pick them up from school just to see him; the player, not his son… and I’m not even an Arsenal fan. Days when he didn’t show up, I’d stylishly stare at his wife and his son… silly, I know... possibly creepy. 🤦🏽‍♀️

I knew the barest minimum about his skills/playing position etc… nothing more than the media buzz because he was famous. I was just excited and in awe that he was a player for the major league. I’ve always been a Man Utd fan, and so I wasn’t going to ask for a picture with an arsenal player and be a sell-out… or maybe I wanted to, but didn’t because I wasn’t going to be that uncool person at his son’s school or embarrass my nieces.

That’s how we behave, we have heard so much about God. He’s famous enough to know the details of His wonderful works. So, we are excited about him, but not fans/followers of Him because we believe it’d restrict us and take us away from the good life club we’re subscribed to. So wrong! We have refused to know beyond the basic knowledge of His being God… what are the specifics though? 🤷🏽‍♀️

So, we go to church to catch a glimpse of Him, like I did with that player. Maybe we even care to take a selfie with him just for the sake of it. But we are not committed to him.

We need to move beyond that to being a fan, have you seen how crazy fan girls are? They are in fan clubs/fandoms, buy merchs, attend every concert or match, and read up all they can about the person and sometimes become obsessive stalkers... that's not where we're going... we take a step away from crazy fan, to being a devoted follower… to having nice conversations with Him, beyond obsessing to actually listening and understanding Him even as we stay in awe of Him, and then being friends with Him, and learning about him, seeing Him as a Father, acknowledging His Lordship; knowing His ways, His likes and dislikes, His books… so we can love him beyond the fame of God; His skills, who He is… His wonderful works. The perfect sacrifice He made to keep this humanity FC on the victorious side.

“A lot of people are fans of Jesus; they want to affiliate with Jesus but they don’t want to submit to him.” Kingsley Okwonkwo

Living your best life is that life of submission, not looking from the outside in as a fan. But being in the inner circle. That’s a win. Plus, He’ll give you access to all His trophies, heavens glory and locker room, and the extravagant riches of His grace