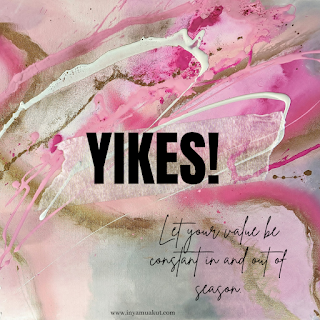 I’m quite witty when I’m with those I’m close to and sometimes mischievous. I love a good laugh; intelligent jokes that is… and I can dish out a good one sometimes, I'm not so shabby with humour.

I have a handful of celebrity friends and acquaintances. They post hilarious things most times, and I have one too many laughs, but sometimes I don’t double tap to like, I catch myself from enjoying the humour, swallow the witty responses … type and delete…, and I leave the room as though I was never there and I never saw it.

And people are watching… trust me, they are!

One day I let loose my guards and dropped a comment on a friend's post, unfortunately, he's a celebrity with over three million followers. I just couldn’t resist it, my wits were going to burst with the response it had conjured so I had to let it out. It wasn’t so bad, it wasn’t crass, but it wasn’t graceful and it was quite unnecessary, promoting values that weren’t mine in any way. Because he's a public figure, my comment was thrown open to o many people. People laughed at my comment(because I mean, I'm hilarious), but you should see the number of messages I got from people who knew me and expressed shock at my humorous comment. Of course, they knew it was a joke… but…

Let your conversations be full of grace…

“Guard your speech. Forsake obscenities and worthless insults; these are nonsensical words that bring disgrace and are unnecessary…” Philippians 5:4(TPT)

People are watching. You’re selling your market/brand whether in the market place or alone in your room with your phone. Maybe it’d have been fine if I DMed the joke and I had private banters like I usually do sometimes... But I shouldn’t even have endorsed such talk.

Sometimes we like the picture without looking at the content, or even comment without giving it a thought… and a random person sees and assumes you’ve endorsed the message being passed across, and it kind of influences him/her or make them question who you are. Look before you leap.

It’s funny that as I wrote this piece I literally went on IG and saw a video by Dr. Mensah Otabil saying, “for the sake of having fun… you forget you’re the light of the world…  it’s not fun to post some of those comments you post. Being a Christian is heavy. Jesus died for you to be saved.”

You're light. You're a brand. Know your values and be careful where you leave your footprints.