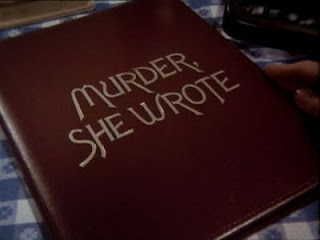 Murder she wrote.
Yes i assault her every once in a while or ever so often but i didn't kill her....i promise you that. I have been an accomplice to various attempts on her life. I'm sure before i finish writing this post, i would have stabbed her a couple of times. It just happens, i have no control over it, but even with all the contempt i have for her, I'm too softhearted to do the actual murder.
Doesn't mean i don't have murder on my mind most times.

You see, the sheriff comes in the person of my sister, in the medieval days she'd be the knight of the 4th order of perfect English, she might even have been the personal adviser to king James when he translated the bible :). Her weapon against the villains of the language securely strapped to her... the dictionary, it's her sword, it's her pistol, it's her ak 47, her defense against us.

I really don't care that I'm seen as a villain sometimes, although i think its unfair to label me that, i mean, i just stab her enough to draw a pool of blood and that's all, a clean nice slice, I'm not like those who actually butcher her and try to suck out her blood. Common, i can construct a sentence or two or four without using any auto correction and i can read a book without referring to the dictionary. My brain translates the words to mean what they ought to mean in the context of the book:)

I've got the English police snooping around me every once in a while, detective sister is there, waiting, ready to whip out her dictionary from her duty belt and cuff me, until i save myself by saying the right thing or I'd be laughed at to a state of ignominy( see i'm not so bad, i can use the term ignominy in a sentence).
You know the lines used for arrest "you have the right to remain silent...bla bla bla" well the detective, sheriff, knight of the English language's line is " baby baby, with all the novels you read...bla bla bla" and the laugh and amazed look comes after the sentence. Oh what shame.

Its all tiring sometimes, this English of a thing, makes me consider doing an actual murder on her. It doesn't help that we live in the times of abbreviated words, and one liners of twitter and text messages and bbm. smh
As long as you know what i'm about to say, or what i meant to say, then i can't be bothered. I wouldn't participate in spelling bees, and i'd rather use my simple words, I've got "hippopotomonstrosesquippedaliophobia"(so maybe my best friend "Google" helped me spell this) but i know the meaning, do you? See, i'm not such a mean ol' villain to the English language.

I may be accused of writting murder or speaking murder, but i don't snuff the life out of the language, i have respect for life, so i assault it with care. Especially when i have an english enforcement agent in the family, and there i go on twitter and i see my fellow english villians trending with care, because there's a 'gbagbaun' mopol in town. i cant even spell the gba something, let alone pronouce it, but i refuse to be booked for that, its not an english word is it?

Murder was the case and they blamed me.....
Email Post
Labels: english murder she wrote