A well-worn one-dollar bill and a similarly distressed twenty-dollar bill arrived at a Federal Reserve Bank to be retired. As they moved along the conveyor belt to be burned, they struck up a conversation. The twenty-dollar bill reminisced about its travels all over the country. "I've had a pretty good life," the twenty proclaimed. "Why I've been to Las Vegas and Atlantic City, the finest restaurants in New York, performances on Broadway, and even a cruise to the Caribbean.""Wow!" said the one-dollar bill. "You've really had an exciting life!""So tell me," says the twenty, "where have you been throughout your lifetime?"The one dollar bill replies, "Oh, I've been to the Methodist Church, the Baptist Church, the Lutheran Church .."The twenty-dollar bill interrupts, "What's a church?" 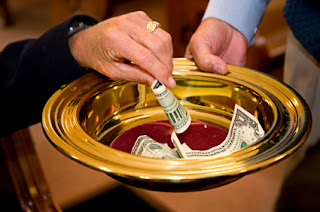 Its such a hilarious joke, yet so wrong to laugh it off without giving much thought to it.
I was a pro at exchanging bills for offerings. Mom would give me a high domination and i always had change at hand to swap. Why in the world would i give so much to the church when i could give the five naira in my bag(more like fifty kobo/one naira coins). It was perfect, i always had extra cash during the week.
Today i ask myself, would i dare present such gifts to earthly kings the way i do to the King of the universe?

We take his grace and blessings for granted.
I've learnt that He doesn't need anything from me. What i don't give, some 'fools' are willing to give more.
Until recently, giving offerings was just something i grew up doing in church every Sunday. Something I'd have loved to avoid because "the money doesn't get to God after all" and so since i'm forced to, i'll give little.
But now i know, If i feel that way, then its better to pass the basket on, ". . . You must each make up your own mind as to how much you should give. Don’t give reluctantly or in response to pressure." 2 Corinthians 9:7


And i know many still act like i did.
Forget about what the pastors and priest would probably do with the money and give in faith, knowing that you're obeying the orders of the greatest king.

There are loads of promises in the bible for those who give to God, but we should be willingly to give our best even if he doesn't give us anything back in return.
Even the pagans give the fattest cow to whoever it is they sacrifice to.
I can't begin to say how blessed i have been from giving.
I'm no more the little girl who swapped offerings.
I give with a joyful heart and with understanding that offering time is more than that 'time in church' or blessing time.
It's a time to give to my king and say 'thank you'
Lets learn to offer God our best.  According to our ability...nothing wrong with the small bills as long as that's what you can afford.) There's obviously something wrong somewhere when you give the lowest denomination in church and head out right after service for brunch in some over priced restaurant(picking the tab of all your friends) or when you can afford to drive expensive cars and buy expensive laces... et co
Lets give our thousand naira and twenty dollar bills grand tours of church. So the next time they have such conversations with the smaller bills, they'll mention church, right next to the finest restaurants while naming places they've been to, and this time, the one dollar bill would ask "what's a church".
Email Post
Labels: offering