There was a fire outbreak at the house in Lagos two days ago. All I know is that it could have been much worse. The generator exploded in the middle of the night, and there was a drum of diesel and then there was fire in the carport and cars were packed under, but for some reason, no car was parked in the last spot, right next to the generator. 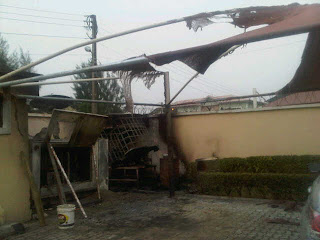 Several factors were in place to prevent collateral damage, details i don't want to go into. But it feels like everything was orchestrated in anticipation of that fire... set in place to make the damage a little less than a grain of sand. Since it was right in front of the house, my sister who was home alone could have been trapped in the compound, all the cars could have gone up in flames and... Thank God for neighbors who came out, thank God for the dear electrician who came around and decided to spend the night in the boys quarters for some funny reason, and who risked driving the cars out of the compound, thank God for the fire service responding... now that's a major miracle, fire service responding just in time in Nigeria? only God knows how that happened.
What would i have done if i lost all my shoes and books?...(I'm allowed a little humor here :p)
All this got me thinking of God's goodness, and how he's always several steps ahead of every pain/issues we're confronted with. That's why we should never stop praying.
God doesn’t say ‘IF ' he says ‘WHEN’ the enemy comes like a flood, the spirit of God will raise a standard against them. (Isaiah 59:19)
Meaning it doesn’t matter who you are, born again or not(better born again and on his side) affliction will come, but God has got your back, he knows the plan of the enemy even before he makes it, and so he goes ahead… the blood of Jesus makes the crooked paths straight, he orchestrates things and puts things in place, so when that flood comes, when that fire comes, we are not consumed because he already went ahead to do things.
Like giving you the wife you married, because he knew there would come a time in your life when everything would turn against you, an attack so bad on everything you've worked for, that your faith would be shaken. So he gave you ‘Kemi' instead of 'Ada', in preparation for that time. Because you see, Ada isn't strong enough, she would walk at the first sign of distress. But he knows Kemi has the shoulders that can wedge a mountain, and so she'll help you keep your head up, she can pray up a storm, without her bosom to lean on, you would take a rope and end it.
He let them lay you off from that Job, because he knows what his perfect will is, if you remained in the comfort and security of your office, you would never have dreamed of taking that path that leads you to your purpose.
He allowed you to have a flat tire just as you drove out of the house, while you mumbled and grumbled about being late, you escaped driving right into that robbery, the one with the stray bullet meant for you.
He allowed 'Akin' to dump you, because he was saving you from a bitter marriage and an even messier divorce.
Thus in everything give thanks... It could have been worse.
He just orchestrates things to work for our good, things we seem do without thinking. He prepares us without us knowing, prepares us and places things in place for those moments when the fire rages. We are saved only by grace.

"Prayer goes into the future of those being prayed for, to prepare the way for that"

I'm thankful i still have a home to go to when I'm back in Lagos. Gosh, God is faithful indeed.
To everyone reading this, God will indeed crown your year with good things, there is nothing that you'll go through that God cannot handle.He'll fill your mouth with testimonies upon testimonies. And remember, when the enemy comes at you... God has already gone ahead to make you a conqueror, you will not be consumed by problems that come your way. Just keep praying, and keep on keeping.
Email Post