The Lure of Turkish Delight...

Have you ever wanted something so bad, that you get consumed at the thought of it?
There's a danger in reading EVERY book you come across, because it claws at your mind and tries to shape your thoughts if you let it. That's why many of us are so disillusioned after we spent our growing years reading Mills and boons and harlequin romance novels. Even the occasional style and glam/wedding mags have taken over our sense of reasoning, we want what they offer and we want it now.

I've wanted to be a vampire... thanks to reading 'an interview with a vampire', i wanted to be a geisha, thanks to the 'memoirs of a geisha' amongst others. I could name all my favorite books to give you an idea of what my mind has shaped my thoughts to be at various points in my life.

I was desperate to crash into some random car, knowing full well the driver would end up being my wealthy, handsome and charming husband or find him seated next to me on a flight to Port Harcourt, thanks to 'No sense of Limits' a novel written by a naija wife Araceli Aipoh. Unfortunately, all the people I've sat next to in planes are plain nuisance. I just want them to shut up already and let me be, and those I've come close to crashing into in Lagos traffic, happen to be okada riders and reckless bus drivers. All the cute ones who would demand for my drivers license and number as a leverage for payment, all in a plot to buy me dinner and propose happen to remain in the books. Reality has disappointed me one to many times.


“Longed for him. Got him. Shit.” ― Margaret Atwood

And so I was ensnared again after i read ‘the lion, the witch and the wardrobe’  The imagined taste of Turkish delight wrapped itself around every one of my senses, i could see the taste, hear the taste, taste the taste and my mind could feel the taste. This torment could only end by actually having the physical Turkish delight in my mouth. It would be such an euphoric feeling, like the heavens bursting in my mouth and sending...(Okay, i can't do the descriptive thing... take a minute here to imagine how great it'd be) Just incase you are lost...

The Queen let another drop fall from her bottle on to the snow, and instantly there appeared a round box, tied with green silk ribbon, which, when opened, turned out to contain several pounds of the best Turkish Delight. Each piece was sweet and light to the very centre and Edmund had never tasted anything more delicious. … At first Edmund tried to remember that it is rude to speak with one's mouth full, but soon he forgot about this and thought only of trying to shovel down as much Turkish Delight as he could, and the more he ate the more he wanted to eat … . 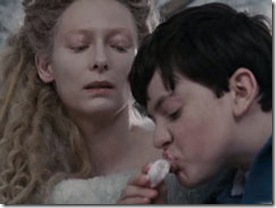 At last the Turkish Delight was all finished and Edmund was looking very hard at the empty box and wishing that she would ask him whether he would like some more. Probably the Queen knew quite well what he was thinking; for she knew, though Edmund did not, that this was enchanted Turkish Delight and that anyone who had once tasted it would want more and more of it, and would even, if they were allowed, go on eating it till they killed themselves.Excerpts from C.S Lewis Chronicles of Narnia: the Lion the witch and the wardrobe…
I was haunted by that thought, driven by it. I wanted to have a taste of something that tasted so good, it could lead a boy to betray his siblings and willingly walk into danger, just because he wanted more of it. At the back of my mind(as per a local girl), I assumed it was just one of those fictitious things Mr Lewis created, and i resigned myself to the fact that i could only imagine what it'd be like… That’s until two years ago, I was at the mall with mum and by the time she remembered to buy a treat for her grand kids, their favorite Auntie Anne's pretzel stand was closed… So we walked into Marks and Spencer’s to grab at a sponge cake or anything, and right in my face was the most beautiful sight ever….

Packs of Turkish delights sang a song of love to me, i proceeded in picking up packs for myself and the kids, assuming it was just the taste of heaven i had imagined and we would have such a feast with it, just like Edmund. I was amazed it took me so long to notice them in the shops.
When we got home, and had a taste, I was so disappointed, I couldn’t even finish chewing the first bite. I hated it. it was disgusting. Not even the kids liked it. Like seriously, I was disappointed at Edmund, he could do better than that...

"When [Edmund] heard that the Lady he had made friends with was a dangerous witch he felt even more uncomfortable. But he still wanted to taste that Turkish Delight again more than he wanted anything else. … He had eaten his share of the dinner, but he hadn't really enjoyed it because he was thinking all the time about Turkish Delight—and there's nothing that spoils the taste of good ordinary food half so much as the memory of bad magic food."

I wanted it so bad, but I could only feel remorse after tasting it. My expectation was cut short... What was the excitement about? The taste of my desire was not worth the endless craving.
Have you ever wanted to do something so bad, that when you did finally get a taste of it, you only felt remorse and disappointment?

"Bread of deceit is sweet to a man; but afterwards his mouth shall be filled with gravel." Proverbs 20:17

That’s how temptation ropes us in, it starts with the visuals we see and next, we are haunted by that image, wanting it so bad…. Then we finally get to have a taste of it and when we do, we realize it's worth nothing. Just a sour taste of shame and regret in our mouth.

We nailed him to the cross all over again for nothing.

Edmund deserved every punishment coming his way for his stupidity, especially death... But Aslan took his place, even when he didn't have to. Just like Christ has chosen to take our place and cover our sins over and over again when we let stupidity and our unguarded hearts rule us.

Thank God for his Love. Many of us would be dead, buried and in hell by now, if not for his loving kindness and grace.


“Dreaming about being an actress, is more exciting then being one.”Marilyn Monroe
Email Post