On Dolphins, Life and Lessons...

I love dolphins. I didn’t know just how much I loved them until I read about them. Then I met Estu and I knew the love was real. They really are amazing creatures… Playful, compassionate, friendly with beautiful minds. They are said to be the most intelligent animals on earth.
I got to hug, tickle, play with, dance with, and kiss ten year old Estu, one of the dolphins at Atlantis The Palm’s dolphin bay in Dubai. He was such a delight to be with. I was so love struck, it’s a wonder my kiss (and that was from the deepest part of my heart) didn’t turn him into a handsome, rich, smiling Arab born-again sheik (yeah, unequally yoked is not an option, even in fairy-tales)…. Oh well, at least we now know the myth of a frog turning into a prince is questionable. Estu is still in the water, charming the hats off other ladies… as a dolphin. Life!!!


I noticed a couple of bite marks/scratches on Estu’s body during the interaction and the dolphin instructor explained that when dolphins play, they tend to bite each other and leave marks, It is unavoidable. He assured us that he would shed the skin off and be as good as new. Isn't that amazing? Every two to four hours the entire top layer of a dolphin’s skin sheds off. Dead cells are replaced with new ones in quick successions. Probably why Dolphins recover from extreme injuries rapidly. I hear gaping wounds are healed in a way that its shape is restored back to normal… isn’t that amazing? “Though the exact methods used to achieve this are not known, dolphins can tolerate and recover from extreme injuries, such as shark bites. The healing process is rapid and even very deep wounds do not cause dolphins to hemorrhage to death. Furthermore, even gaping wounds restore in such a way that the animal's body shape is restored, and infection of such large wounds seems rare.” wikipedia


There are one or two things humans, or specifically Christians can learn from Dolphins. In human interaction, we tend to get into situations that cause us to fall in our Christian walk and hurt ourselves, like dolphins play and leave marks… it’s almost impossible not to get angry and mad, and exchange words, and gossip when we interact with fellow humans. But who says we should walk around with the scars of our carelessness breaking our hearts and making us hide away from God’s presence. God’s love is renewed every morning….
He gives us fresh grace for each day, each moment. Grace that sheds off the scars of our mistakes and gives us a spanking new skin… don’t go around beating yourself up and refusing to walk in the grace available for you. Like the dolphins, allow your skin/heart to shed, and be clothed anew. It says very deep wounds do not cause them to hemorrhage to death… There isn’t a Sin you can commit that will make God love you less, You can never be too bad for the love of God to reach you. Don’t let your guilt hemorrhage you to death.

As I wrote this, I got a mail from the ‘convo on devotion’ group I belong to. The devotional for the day was ‘A sense of unworthiness’ by David Wilkerson. It was so timely (definitely not a coincidence) as I could relate it to this. Here’s an excerpt “it is certain that we will stumble at times because the race is going to continue until our Lord returns. But we must always get on our feet and continue moving on, “for whatsoever is born of God overcometh the world” (1 John 5:4) He that overcometh shall inherit all things; and I will be his God, and he shall be my son”(Revelation 21:7)
…… “The fastest way to get rid of “a sense of unworthiness” is to trust In Christ’s forgiveness. And He is ready to forgive at all times: “For thou, Lord, art good, and ready to forgive; and plenteous in mercy unto all them that call upon thee” (psalm 86:5)

Something else about Dolphins…  “However, dolphins can establish strong social bonds; they will stay with injured or ill individuals, even helping them to breathe by bringing them to the surface if needed. This altruism does not appear to be limited to their own species however. The dolphin Moko in New Zealand has been observed guiding a female Pygmy Sperm Whale together with her calf out of shallow water where they had stranded several times. They have also been seen protecting swimmers from sharks by swimming circles around the swimmers or charging the sharks to make them go away.”  Wikipedia
What a show of love, and compassion from animals.

If only Christians could be that loving. If only we could be the hand that helps pull up a spiritually sick/fallen Christian, to surround them with love like the dolphins and pray for them, encourage them… Protect them from the shark attack that comes for the final kill. Sharks are always ready to attack at the slightest whiff of blood. They are so ruthless; they would even eat their own, as long as there’s blood. Unfortunately many Christians are more of sharks than Dolphins… We’re always ready to crucify, and label another as a failure because they have a struggle. To point fingers and spread the word of their failure and bring their past to light. With our judgment we ‘finish them’. You know like the mortal kombat game, after you’ve won the battle and the opponent is obviously dying, and with relish you eagerly tap on the control pad, to display your moves when the voice commands, “finish him”... That final blow that kills them dead.

That’s what we do as Christians, we kill fellow Christians dead when we find them bleeding, it’s more fun doing that than trying to help restore them, to push them to the surface for survival… “Live creatively, friends. If someone falls into sin, forgivingly restore him, saving your critical comments for yourself. You might be needing forgiveness before the day's out. Stoop down and reach out to those who are oppressed. Share their burdens, and so complete Christ's law. If you think you are too good for that, you are badly deceived” Galatians 6:1-3 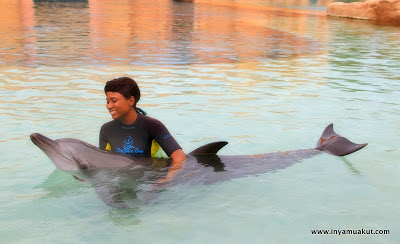 Oh there’s so much more we could learn from Dolphins… Isn't God so amazing? How He thinks up certain creatures, I have no idea. I just simply remain in awe of Him.
Email Post