Doggy no be bingo...

I'm not a dog person. Maybe i once went crazy when daddy brought a black puppy home, we all really did care for her. I watched her grow, i watched her have her puppies and i cried when they had to give some of the puppies away. But my dog affair died after that dog died. If i have to touch a dog, i run to scrub my hands right after. While i think some of them are cute, i don't think they're cute enough to jump on my bed, eat from my plate or lick my face. I am not 'anti-dog', I'm just not into them beyond awwwing and uhhhhing when i see cute puppies or watch dog movies.

My sister and i were driving out one day and we saw a man walking this beautiful dogs, and she said "they're blessed with nice dogs here(obodo oyinbo), God knows why we don't have such dogs in Nigeria"
And indeed she couldn't have been more correct. With all the malnourished bingos walking the streets of Nigeria, the dog is nothing near a 'man's best friend'. Just a handful of people drive around Lagos with their dogs in their cars... mostly expatriates and wannabe ladies who've watched too much movies for their own good, and this handful are the ones buying the dog food and treating their dogs like humans with respect.
Nigerian dogs are given anything to eat... why bother with dog food when they can eat whatever they can find in the dump, or whatever you can't finish from your plate ...
I used to think the 'joke' of eating dogs was just a joke... apparently i was wrong. I saw this article in the papers some months ago and i was stunned, like seriously? I remember as a child this man riding a bicycle would ride past the house with miserable looking dogs in a cage tied behind his bike. Our help at that time would tell me the dogs were sold to him and he was going to resell it to those(from a particular geographical location of the country) who ate it. It was just a plain silly old joke to me.
"God knows why we don't have such dogs running round the streets of Nigeria"
Imagine a nice little Chihuahua head served isi-ewu style, or a bull dog stew or hound dog suya, or peppered poodle.....
I checked and there are over three hundred breeds of dogs out there. Most of them dressed in more designer gears than some could ever afford to own, going to dog spas and having their own nannies et co. Treated better than some children in this country.
Yet we only see the usual bingo type dogs and Alsatian dogs in Nigeria(...and not because they're our best friends, but because who else would assist the guards in keeping our houses safe?) And just a handful of the cute breeds. Oh, we have the others, but they know better than to spew the streets of Nigeria:) .

They say its a 'dog eat dog world' out there. But in Nigeria... It's a man eat dog world. Dogs may be a mans best friend, but backbiting best friends is taken literal in these parts :)
Be sure to drop by at Itoroobong when ever you're in the area... We can't guarantee Labrador peppersoup, but at least you get to drink the palm wine, and a nice bowl of gear box(plate of dogs liver,heart and kidneys) or maybe a plate of Tyre is what you would prefer(dog legs), maybe telephone?(dog's tail) or probably headlights(the bowl where the dog eyes happen to be in, more like the isi-ewu of dog world). We promise we do the sentencing(clubbing the dog to death before cooking) ourselves, so you don't have to worried if you're eating a dead dog found on the road, and our meals are cooked with the expertise only an akwa ibom Okon can whip up. 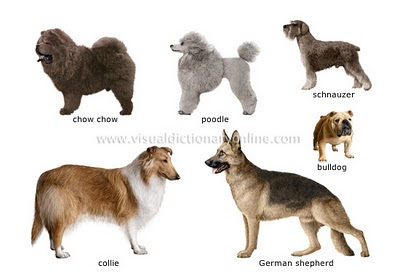 *apparently dog meat is called 404 after the Peugeot 404 car because dogs run as fast as the car. Who would have thought? And yes i did a bit of research on this. It's beyond me that anyone would want to eat a dog, shouldn't that be called cannibalism?... ewwww. Ok, i know someone goes eww at the thought of others eating beef, but hey... I've never had a cow as a pet.