I don't know how i read Jonathan Swift's book when i was younger... i tried reading some pages again as an adult and i was somewhere between lost and... well lost. I got to see the recent movie adaptation with Jack black... it was a decent enough movie, more bearable than the book or the previous movie.
It got me thinking... Gulliver's travels sort of comes alive in our day to day life. It's an adventure closer to home than we realize... It begins and ends in our mind at one point, what we perceive situations to be. Well at least that's what i make of it, it's easier giving myself that thought than trying to figure out the philosophy of the book really talks about. 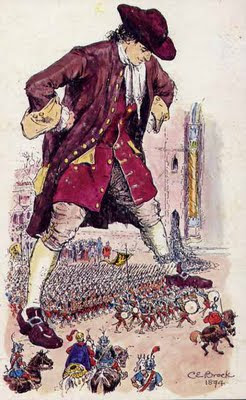 We have our moments. When we are seen as larger than life. When we arrive Lilliput. A place where we are perceived as giants, because the people we come across are so small minded and insecure by what you have. They hate that you wear lovely colors, use red lipstick and speak your mind... a people so closed and held in bondage by their shallowness... its a shock to see someone from the outside come in their midst and live in a standard so different from what they are used too. And sometimes this people are our friends... they hate you just because they feel they have to be like you to make their lives better.

And because they see you as bigger than them, they'd rather fight you and call you an enemy than be the best friends they can be. They're hostile and make life difficult for you in their midst. You're sentenced and criticized for every sneeze and every breath you take… because you’re better than them... in their minds eyes, what their perception tells them.
Sometimes they are lucky enough to eventually realize you're no threat to them like the little men in the movie did, and they end up learning from you and seeing themselves as big as you are, sometimes not.
Guard your heart with all diligence.... what you see in your minds eye is usually what you get. See me as better than you, and I'll definitely be better than you even if I'm not half as talented as you are, and you'll spend the rest of your life hating on me and walking around like an ant while i strut around like the giant you've perceived me to be.
Stop being a lilliputian. Refuse to put yourself down and under. Self esteem has to be on a rise in you, just like yeast in a warm room... 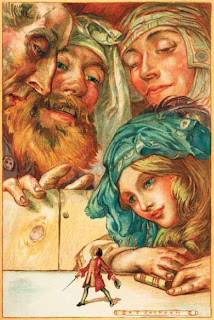 And then we arrive in Brobdingnag(never ask me to pronounce this please), a land of giants. Only this time you're seen as the little one. And you're not hostile to the big guys, you're just in a larger than life situation where the giants and lords of the land are not hostile but are amused by you.

It's like a 'Johnny just come' situation. Johnny going to 'ogbodo oyinbo' for the first time, where he sees 'oyinbo people' and he sort of feels they've got to be way ahead of him, he's got a long way to catch up but he's determined... Just because everything seems to work for them and life is somewhat easily than where he comes from where electricity is a luxury. He knows he's worth something, but he's at a disadvantage because of where he comes from... Johnny is special in this land, they want to feel his skin to see if the black will rub off, they ask him silly questions like "do you have lions as pets back home?" they want to know if "he lives in a tree'...(i know a couple of people who've been asked this questions).

Or lets say you suddenly come into this wealth or become a billionaire wife(or whatever situation that elevates you far above where you were in life). A position that takes you round the world to meet, party and dine with the who is who... Life suddenly couldn't get any posher than what has been tossed at you. It's overwhelming. You don't see yourself as less than this people you dine with, but you just have a lot of catching up to do in getting used to the good life. And so you start with the fake accents(ahem)
Sometimes when the 'big' people know you feel a little stunted by the whole new world thing, they act so nice to you... so nice that you feel patronized, because you're nothing but a spectacle to them as you try to break into your new louboutin shoes...
I'm sure Gulliver will tell you it's really not nice been in the land of giants, those long long meetings/lunches et co before you get accepted... and No, this is beyond your perspective and what your minds eye sees, this is the real world.
We've all been there at one point or the other on both sides of the table... confident, but overwhelmed with all the new things we have to break into... I guess when you get to the land of the Brobdingnag, you just hang in there and toughen up till you finally feel comfy in your new shoes and you can pick the right fork up even if you're blindfolded... you'll be accepted soon enough.

and that's all folks... My thoughts on Gulliver's travels and i'm sticking to it, even if you think it rings silly :).
Email Post