How pounded yam saved my life... This isn't an Ofili production.

There are things that are not expected of me as my mother’s daughter, my sisters sister, my aunties niece, my nieces aunty and my grandma's grandchild. Maybe a little of those things are expected as my brothers sister, but definitely more as my fathers daughter (yeah, I’m kind of dizzy from all that talk too)
You see, when I was young, it was a taboo to be on an okada… Once I was in the car and who wheezed past on an okada waving at us? Nobody but the father himself. The shame of it.
He took my brother, mum and I to a joint to eat isi-ewu once… I preferred the outings to hotels…mum wasn't so thrilled either. I couldn’t imagine how anyone would want to eat isi-ewu, something so bitter, prepared in such an environment. Why father?

Once I was traveling to Jos with him, just the two of us, and we stopped at this disgusting (in my opinion as per my mothers daughter) pounded yam joint in kadroko, a town in Nassarawa State, just between Makurdi and Lafia… daddy ate there!!!! Little me was so pissed at him, I sat down and watched him with disdain… why oh why do you shame me so father? I may not have worn bras or known how to bait my eyelash then, but I was such a mature snub.
Twenty years later, with bras, pimples and makeup, and i am a little less critical of daddy and some of the ‘down to earth’ ways he chose to live because hey… I am down to earth too…  Thanks to my uni, I found myself in a phase where necessity won fare and square, I ate out in local joints with new friends, I fell in love with isi-ewu, I climbed okadas(to mums horror)
I started working, and the cleaner was my proxy in the board of  addiction to agege bread and boli on Adeyemo Alakija street, i would 'chop and clean mouth' in the office and come out acting like a babe, a true child of my mother.
And here's a picture of me eating mango and gisting with the two drivers and one of the factory staff…(well that’s the chair i got up from)I am down to earth indeed... 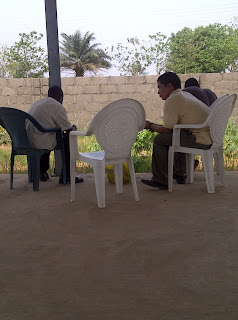 About twenty years later, my brother being the true fathers son that he is, came home from Abuja one day, I wondered why he wouldn’t eat the meal prepared for him… he told me the driver stopped at some joint in kadroko and mennnn the pounded yam was out of this world. Alarm bells rang… that’s where daddy and I stopped once. How couldn't i have remembered the place after driving past it all these years? Apparently it is a hot joint, ‘big boys’ stop there to eat and life is good for them.
Fast forward to a few weeks later, my brother, the driver and I were on our way from Abuja to makurdi… at Lafia, I mentioned to the driver that we would stop to eat at 'that place'… but alas he didn't think i was serious and drove passed… but he had to do a you-turn, that's how determined i was. We stopped at this joint that I once judged and sentenced daddy to the jail of embarrassing parent years ago for daring to eat at.
I guess it falls in the category of lowest of the low places i have come 'down to earth' at. You’re almost sitting on the road… and my bright colored outfit did not help matters, what if someone I knew passed and saw me? there was this speed bump right in front that made sure travelers slowed down real good at that spot… anyone staring at me would be able to do so in slow motion, they would get every detail of my outfit and have enough time to take a picture of me and post on facebook. When the food came, i lost every shred of shame.
The food? Oh my goodness!!!! Somebody shoot me. I had spent the previous weekend eating in so called four star hotels and restaurants in Port-Harcourt and Abuja, spending small fortunes on meals and buffets that did nothing and tasted like nothing, and there I was, the best pounded yam and egusi I had eaten in ages… it could very well compete with grandma and her daughters food, and trust me grandmas soups are legendary.
I couldn’t stop eating, not even when I was full… my brother commented on how I was almost finishing the food. I hardly ever finish my food, I’m a certified food waster, ask those who have been kind but unfortunate enough to take me out on dates to expensive restaurants… they stone me and wring my neck in their minds as they smile and pay through their teeth for wasted food.
I blessed God for that meal… brother made a comment, something about hoping they don’t put anything in it(you know mama bashira things)… I honestly don’t care, we had barely driven off and I was already calculating the distance between kadroko and makurdi… thinking of driving down ever so often to have a meal… risking my life on a truck A road, driving for an hour plus to have egusi soup, bush meat and pounded yam.

I have beautiful daydreams of that meal, sometimes i see it, i taste it, and i smile at the thought of it… I gushed about it to my first sister and I could feel the vibe from the phone, not so good… and my third sister? Well she suggested she’ll try it if its that good, but she’ll take a food flask to pack it up so she doesn’t have to sit there(of course she'd remain in the car hidden and i'd be sure to do the dirty work)… Snubs! I haven’t mentioned it to my second sister, she might not be so noble about it, neither will my mum or aunties, after shaming them by eating in a road side buka where truckers stop to eat…. Not even the fact that some 'big boys' stop there is enough vindication.
So daddy, just incase you can read this… forgive me for being so judgmental… I am your daughter after all. Who knows, if I discovered this earlier, we may have had wonderful father/daughter bonding moments, driving to eat pounded yam out of town, our own little secret.
How pounded yam saved my life? Well, it didn't. It may have put my life in a little food bondage instead. But i got a truth from there... the things we look down on sometimes hold a lot of beauty in them, we miss out on some delicious opportunities by turning up our nose on the size of the package. Down to earth gives us a perfect chance to dig up treasures without sweat.