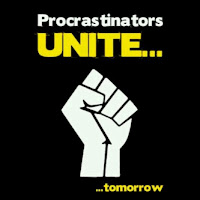 Procrastination is such a bad bad bad boy. I've left things to linger longer than they should have. I am ashamed of myself. Sometimes i feel like Scarlet from gone with the wind pushing things to tomorrow and then tomorrow... "I can't think about this now. I'll go crazy if I do. I'll think about it tomorrow."
I'll begin to make good use of my time and by Gods grace complete my project before the year runs out. I'll start for real tomorrow. Tomorrow is another day.


I know some men call their wives 'mummy' and some wives call their husbands 'daddy'. When it comes to terms of endearment, to each his own. I have no qualms with that. But the day my Husband decides to call me 'mummy' instead of whatever it is that sounds nice and sweet... that's the day we go to the hospital for a DNA test, to show him that i am in no way an Egyptian mummy, and i am not his mother and neither is he my father.


It's Halloween today and the lights are turned off, to ward off the candy eating monsters. My niece was amost tempted to hand out baba blue and vicks lemon sweets last year when they came calling.(who has sen the baba blue commercials? google vicks baba blue, you'll love it) Why anyone would celebrate this day i wonder... but then i guess some don't know what it signifies, its just a fun day to dress in costumes and feel like something you're not. Was at the excel center a few nights ago and i saw people dressed in the scariest costumes ever... there was something beyond the fun of dressing up in scary outfits in their looks, it freaked me out. 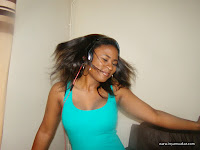 I never was overly impressed with the beats by dre headphone. I mean i've thought about giving diddy beats a try as they're smaller and stuff. So one day i decided to use my brothers beats. Goodness, those things make you feel like you're in another realm. I played some worship songs and i got lost. I'm definitely getting myself a beats piece. The perfect companion for the tube. And no, i wouldn't be using it as a neck accessory, it'll serve it's true purpose. (shout out to my naija bros and sisters who post pix after pix of their beats headphones around their neck. una well done o)

It's amazing how advanced, educated and posh we seem to be, but when the sun goes down and we all seat in our houses we're all striped down and just as ancient as our ancestors were. People still discriminate against tribes. A friend from Calabar wouldn't date a rich, fine, sweet Akwa Ibom boy she liked... because apparently the Akwa Ibom people were the slaves back in the day or something like that. I have a dozen other examples... the igbos and their intolerance for Osu people etc. I've seen people loose their joy just because of the tribe factor. Oh well, to each his own. I'm not innocent either, sometimes i get primitive especially when it comes to accents, and I think it's really lame.

I'm not a fan of the Kardarshians. Truth is, i didn't know who they were till i think last year? but two of my three sisters wouldn't mind setting reminders to watch them on E. And so it is that i got to watch the fairytale wedding. I saw almost everything wrong, and i was sure it wouldn't last. They were just so different, he seemed like such a traditionalist and she's all things not conventional and bla bla bla ...  Somewhere deep inside i hoped i was wrong, i really wanted it to be something that would prove everyone wrong. Oh well....
Marriage goes beyond the planning and how spectacular and magical the day would be. It goes beyond wearing three different dresses just because you can. It goes beyond the ring and how much it cost. It's unfortunate that in today's world, away from Hollywood and right in our backyards, marriage has been summed up as these superficial things and devalued by the day. Nothing more than the display of the day itself. No ones thinking ahead, to a moment where there's no dress fitting to go to, and no meeting with the wedding planner, no cake tasting... God will help us sha.


Thanks to didi, honeydame and Martha for the versatile blog award... I'm too lazy to participate. But i do appreciate it :)
And a shout out to all my followers... God bless you plenty.